I never intended to discuss any political figures on my blog.  However, last night I found myself sitting directly across a table from the Mayor of Atlanta enjoying the Chef's Tasting Menu at Bluepointe in Buckhead.  My husband's boss had purchased a "Dinner with the Mayor" from the silent auction at the Policeman's Ball and graciously asked us to join him.

Let's get down to business.  This is what I wore -

And here is a picture of me with the Mayor - 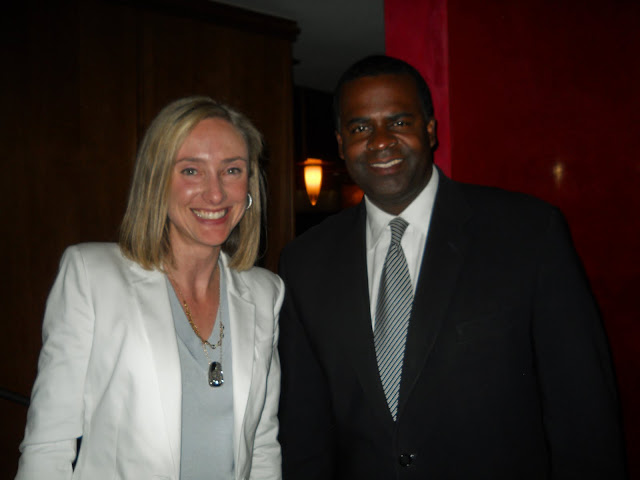 Mayor Reed comes across as calm, cool, and collected.  Yet I am fascinated by the sheer energy it must take to maintain his 14 hour work days of meeting after meeting, event after event.  Before he came to dinner with us, he had already attended a ribbon cutting ceremony for a small store and spent hours with a group of executives giving a speech and answering questions.  Then he had one more meeting to attend after dinner.  Unfortunately his girlfriend could not join us last night.  She was worn out from hosting Michelle Obama, who had been in town the previous day to raise money for the President's next campaign.  I asked him if he ever gets to take a vacation.  He said that he does not, but he tries to take every Sunday off to go to church and rest.  I'm a big fan of that.

Breaking news from the Mayor.  You heard it here first (unless you read it about it months ago in the AJC) - Atlanta is getting a streetcar!  I knew there had been discussion about it for years, but I didn't know it is really going to happen.  My daughter will be very excited.  Evidently streetcars have historically been more than just a fun addition to a city.  They tend to help revitalize areas economically.  Good for downtown Atlanta.

He has a lot of plans to help grow Atlanta's economy including working with the airport to make Atlanta a logistics hub.  He is pushing for more freight to come into the Atlanta airport during the wee hours of night, which will bring in a lot of new jobs.  He also wants to obtain funding from the President to build a train from Atlanta to Savannah, so you can get to Savannah in an hour.  I really wanted to ask him some fashion and shopping questions, but the conversation never got that light.  He was on point all the time.

After tonight, I'm officially naming my husband as my Blog Manager, because he continues to take my blog to places I never thought it would go (evening gown design, Las Vegas, a dating service, lunch hot spots, and now dinner with the Mayor).  In a few weeks, we are going to the best place yet...
Posted by Meredith M Howard

Love the necklace choice with your outfit. Definitely a signature piece.

You are funny. Maybe I'll get to ask that question next time.

Do you remember how I agonized over buying that necklace for $100? Her stuff goes for over $500 now. I got a bargain.